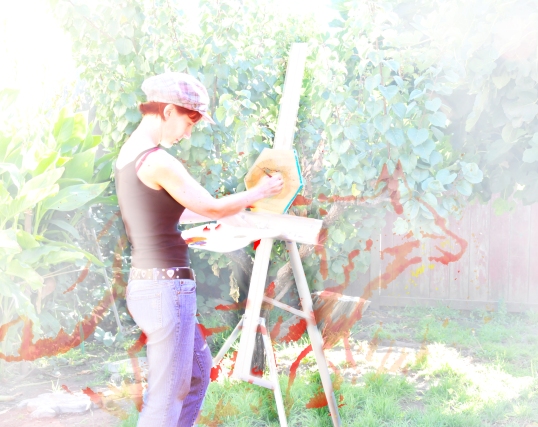 Bay Area native and Northern California multidisciplinarian Melissa K. Smith thrives in painterly divides where photochemical currents intersect with alchemical domains, collide, enrich mediums, media and ideas for her practiced art of photo-mâché.  This process, that of taking from the knowable, tangible universe and connecting it with elsewhere less definitive, is part distillation and part transmutation.  The result is a malleable composite from which she forms shape identities into three-dimensional realities defined by abstract impressions and illusory patterns.  With a long career that includes traditional forms and new media techniques, her core themes are deeply rooted in myths and mysticism, in the arcane lore of studied expressions and keen observances.  Her work inspires the viewer to break away from rigid preconceived boundaries and return as if a child governed by enthusiasm for nature and play.  Her influences are as varied as her mediums, from the way Marc Chagall made dreams and nightmares colorful odes of limitless skies to the introspective gaze of Frida Kahlo’s portraits beckoning us to see inside the broken the freedom of imagination.  Melissa’s work is informed by a vast knowledge of the hidden, intriguing the viewer, positioning us to see the known and unknown as equal and necessary notions of light and dark, air and wind, doorway and destination.

Melissa lives and works in the diverse arts communities of the East Bay, bridging Alameda and Contra Costa, routes known and explored from Oakland to Berkeley, El Cerrito and Albany.  Painter, inker, actress, producer – artist and dreamer, she’s an avid juggler of ways and means, new and ancient, tried and true formalism and airy otherworldly.  She is as comfortable with her trusty feather-weight Holga as her 2lb Nikon DSLR side by side in art and instruction, sales and for hire projects and commissions.  Fond of midnight excursions over daylight company, happenstance to planned routines, you’ll find her making places to bring the viewer there or simply as a point of departure and discovery.  Her work appears online and in gallery spaces, sparking living room conversations and open air marketplaces, museums, public walls and government halls next to out-of-the-way and private homes.  She earned dual undergraduate degrees in art, form and theory with coursework in liberal studies and creative expression before being accepted into the Arts & Consciousness program at JFK University in Berkeley where she earned her Masters in transformative arts and consciousness.  After additional studio work she set out teaching technique and form in Central and Northern California with a summer traveling to the East Coast, New York and Italy where she taught Italian students in Lucca in painting, poetry and photography. 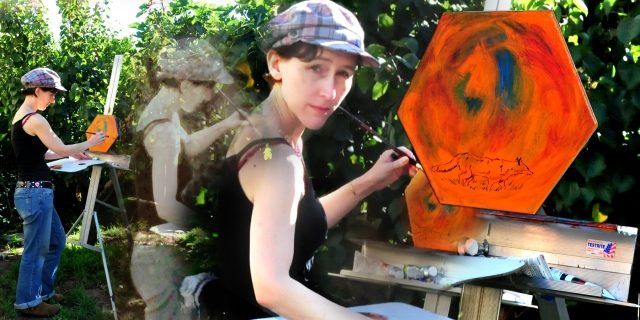 “Honey Hunter is me returning to the paint and canvas shapes I love,” Melissa explains about the painting that was accepted for Hospitality House’s Community Arts Program exhibit “Honeycomb 2012”.  Her “works of the moments” include painting abstracts and expressionism and photo montage, pen designs and digital backdrops that always seem to be some kind of preparation for painting.  Returning to the streets in a way, for another opportunity to join other performers and artists of the people, for the people and by the people, Melissa’s paintings are at once part of the group and leading them to deeper meaning.  Melissa’s imagery and expressions reveal an exacting attention to the nether-spaces in color and form where layered, complex spatial formalities meet the sudden, often fleeting lines between suggestion and innuendo, fact and fiction, there and everywhere.  These structured juxtapositions of space and imagined space tell us that the subjects of her worlds must first begin with their own inner fortitude before being allowed to exist entirely on their own.  This idea of examination and definition is often represented by the identity of “other” in her work and the evolving relationship between viewer, participant and muse as a place to land or take off from.  Whether uniting disciplines and study, people and moments, Melissa finds every work an opportunity to move forward into a collective now.

Presented alone Honey Hunter is a whimsical palette of familiar themes, the hunter in space and time seeking to survive in uncertain places.  The orange and green hues give way to complex layers of further refined luminosity, gradations of light and dark giving the scant lines of the wolf figure a sense of buoyancy and lively play.  Once connected with the other paintings in the honeycomb pattern of the exhibit, placed there atop the others as both a shining crown beckoning one further to new heights and imaginings, the full effect and accomplishment of the painting is achieved, underscoring the theme of San Francisco’s Central City Hospitality House as a retreat for the senses of the viewer and home to artists everywhere looking to work through their life matters artfully and free.

Asked of her invitation to submit work for the show, Melissa was first interested in working with a community project in San Francisco where she could connect her East Bay inspirations with that of an urban city landscape.  “I wanted to take advantage of the shape, the octagonal window into a place I’ve been before but different this time.”  Melissa wants to point out her love of geometries and astronomical lines, reminding us of the space shuttle Endeavor’s recent trip over the Bay Area and literally over her head in photo and video she shot from the hillside of El Cerrito.  “This was for me a snapshot portrait capturing the wild animals that call our hills home and the wild animals inside us, in our modern lives desperate to get out and put them in a space together.  In addition the previously mentioned work, Melissa is also a video artist often capturing and documenting the wild animals of El Cerrito – as in this video:

This is their dance,” she adds playfully.  “I want to watch people dance with them, the myths and legends of the dancer and the hunter locked in step together, chasing one another, living and ultimately exploring together.”

“Honey Hunter came to me the way I hope it reaches the viewer, as a chance to peek in on the wild all around us and inside of us.  Even as we’re speeding around in digital ones and zeros there’s dirt under our feet, under our nails, in our hair.  We need it even as much as we’re always washing our hands.  What is happening in this painting is what’s been happening for eons, the introduction of two opposing forces that need one another to live – by feeding on one another.  They take the honey which is, in a way, life-sustaining nectar from nature and also a trap, a way of enticing you to come closer.  The duality of nature.”

Melissa is a working artist, photographer and videographer, independent film and video producer working through out Northern California with original art and multi-media creations available for sale, commission and exhibition.  She is also the blogger in charge of content for From The Everywhere, co-owner and contributing editor of Dissave Pictures – an independent production company by artists and for artists, serving the greater San Francisco Bay Area, and she is also available by appointment for one-on-one and group instruction of photography and art lessons.  In addition she is the artist, creator and publisher of the graphic novel series Blood Roses in its fifth print edition; look for an anthology coming soon.

Gallery 146 showcases the work of emerging artists in the Community Arts Program, San Francisco’s only free-of-charge fine arts studio for poor, homeless, formerly homeless and at-risk adults. We encourage you to visit Gallery 146 to view and purchase original work created by our talented local artists.

HONEYCOMB, a group exhibition similar to past CAP shows , MY OTHER HALF, THE 8 X 10 SHOW, and HOMAGE TO THE SQUARE, aimed at strengthening the sense of collective and collaboration at the CAP. Artists are tasked to create new work using the same restrictions; in this case, a hexagon-shaped canvas. Despite these limits, the unique and individual manner in which each artist blossoms truly demonstrates the wonderful range of styles that form this group of artists. “Artists utilizing the CAP facilities are really a collective – sharing materials, space, equipment, etc.”, says Ivan Vera, CAP Program Manager. “There are constant limitations in this type of environment, so projects like these really showcase each artist’s individual point of view.” The title of the exhibition references the collective hive of diverse styles at the CAP.

The exhibitions will be on view from August 17 through October 5, 2012, with an artist reception on Friday, September 28, 2012.  SFgate Article: “Tenderloin arts program has workshops, open studio”

Rory Dean is a multi-medium artist, writer and new media strategist with a background as a creative consultant and technology liaison in the San Francisco Bay Area. His broad experiences and specialties include print-to-web publicity, promotions and design marketing using traditional and social media networks. As a motion pictures and television professional, his short films, productions and commercials have screened to domestic and international audiences. His connections to a diverse client base include artists, entertainers, corporations, non-profits and everyday people.. Dean is co-owner and founder of Dissave Pictures, a boutique production company focusing on audio, video, photography and multi-media designs. Dean's personal and professional background includes dreaming and avid notebook journaling, creative and copy writing, promotions and marketing, audio/video production, photography, videography, editing, web design and new media. He’s also a fan of collaboration and knows when to turn the reigns over, offer feedback, lead the team and step aside. His portfolio includes print, online, film, video, photography, graphic design and promotions. He’ll show you. He has a book and everything. "When not juggling various online worlds, I do a pretty good mime – but that’s another story."
View all posts by rorydean →
This entry was posted in Essays on art, Speak-Freely and tagged above the line, arts and consciousness, bay area artist, CAP Program, community arts program, dissave pictures, east bay, el cerrito, honey hunter, honeycomb exhibit, hospitality house, jfk university, melissa dean, melissa k. smith, multi-media, northern california, painter, photo-mâché, rory dean, sense of collective and collaboration, works of the moment. Bookmark the permalink.