Filmmaker Rory Dean is a Film Critic and Movie Blogger; Lineman in the contact sport of dreaming.

Here I am again, another slide into remembering those everyday parks and county fair beginnings of my childhood, sitting Indian style on a piece of cardboard just big enough to make the hillside at a country fair slick as ice, a child’s 5 second rocket ship ride.  I’ve been writing this post forever and I haven’t found a way to finish it.  Maybe today, maybe it’s my morning ritual of talking into the wind, getting lost in Bay breezes.  A recent run in with the end of all ends got me to thinking – now is as good as any to post this.  Who knows what tomorrows brings.  It -is- what it -is- after all is said and done, sometimes impossible, almost always the leading and trailing edges of white tunnel passages; neither light or particularly dark but for the light of life that makes use of our disproportionate pieces.

Writing keeps me from falling down so I move in and out of stories, moments at a time of trying, always have and most likely always will – until I can’t or won’t or shouldn’t.  It’s sort of like moving pictures and notebook page airplanes gliding over keyboard finger dances, pen and ink sketches from my Rotring, fine lines digging in every field for white fiber sentences.  Maybe it’s the bits of dialogue that makes paragraphs come to life, room sketches before scene numbers and multi-colored draft pages; my first movie comes back as quickly as the last, all that juggling and stumbling to the one I screened in San Francisco and the ones I missed in Los Angeles and Sacramento, that one that went to Washington and the one I’m working on now.  The funny thing is you don’t always get the credit you should on small films, on student productions with cheap pizza craft services and public transportation crew calls.  Somewhere between wanting and finally doing it I got here, reflecting on the years I spent imagining about being here, another writer to filmmaker guilty all the time of thinking the art instead of the business of commerce.  I’m glad I found the way to being a film critic because it keeps me from giving in.  I dice up scenes and screenplay misdemeanors, sit on pitch panels and critique at all hours in cafes and cramped concrete porch confessionals.  I arrive in tomorrow and the tomorrow after that because dreams always meet me halfway, trippingly, quick trips seemingly unendingly.  Film maker and film critic, movie blogger and admirer, lover and procrastinater, thinking out loud about the unyielding lights of cinema.

I write from the heart and to it, characters against insurmountable odds of living and dying, romance an impossibility of class warfare not high-speed auto chases and million dollar budgets for less than convincing monster flicks.  Nothing wrong with either, just different, better for having some of the same but often lacking the perfect mix.  I remember this short story that became a series of sorts when I was a kid and didn’t know any better; I called it “Way Up In Alaska” but I never got that far in this world.  There were other stories about people like me and my brother, characters imagined and sometimes copied from television shows like Dukes of Hazzard, Bring Em’ Back Alive, Tales  of the Gold Monkey.  Later I followed an old 8mm camera into the dark, learned how to load film, then cartridges, how to spool a projector and shoot scenes and setups; some of them came out, others lost light leaks burning up celluloid streams.  Ask a filmmaker that’s shot film, touched it and smelled it, felt it spinning between their fingers racing around a flatbed Moviola to make scenes come together and they’ll get lost in the process; somewhere before the splice, the razor blade slice and tiny tape shape.  It’s a love affair with tactile nostalgia for the sake of it; the warmth of a workprint, the reward of a timing report revealing the perfect color balance of red, green and blue light for scene 1, take 1, 96 feet + 14 frames.  It’s a lost to losing art, the printer points or c-lights, the magic range like magic hour between day and night, the 20-20-20 eyesight of the nearsighted and farsighted dreamer, perpetual filmmaker living in the heartbeat of photo-chemical lab normal outcomes.  There I go again, color and b/w negative showing where I get lost.

All that youthful abandon took me to mountain tops and other countries looking for the chance to put my stories to the test, word pictures becoming moving picture-pictures.  I guess all that pretending and writing paid off, eventual detours and stumbling not withstanding, earning me a way in to San Francisco where I fought my way into an aging film program at the Academy of Art University, back when you still had to have more than a check to get in.  It was basements and old store rooms with attached dark rooms, the sound and smell of film stock somewhere between Motion Pictures & Television, dreaming and falling apart, chasing ideas and the next great script, movie, production – something, everything.  Incredible times gave way to incredible moments, the stuff of other writings and better prepared holdings.  For now it’s this now, these days turning back to all that early writing, revisiting and imagining, putting it down and lifting it up as far as I can see – the top of trees and high power lines, sharing and exploring again, making the most of this kind of dance and remorse; all the time it takes to open up here, share, engage and make everywhere feel like right next door. 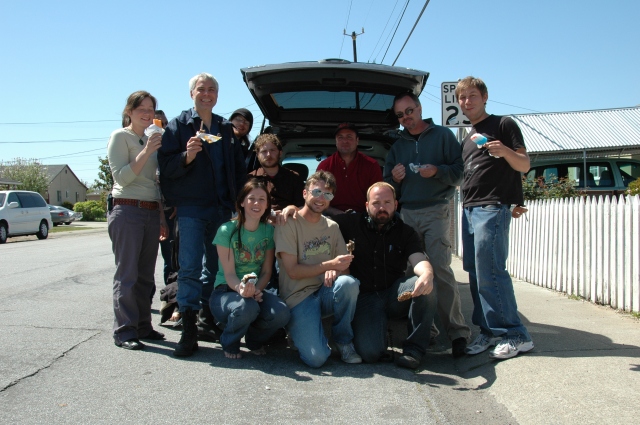 Keeping this blog going has been is an incredible amount of work, almost as much as making movies, different and the same, one feeding the other, giving and taking away without the camaraderie, the standing around waiting for the next setups surrounded by others working on the same subtle expressions.  Trying to keep up with an industry that’s by all accounts one step away from total ruin and infinite disaster every single day is daunting, what with the struggles to make movies and be in them, to market them and nurture people, places and extras into existence, to keep a tight ship on set and off, to fill theaters with those cardboard cut outs that sometimes costs thousands and thousands of dollars for a movie that sinks over the weekend and drains into rental queues and dusty bargain shopping bins.  Then there’s all the awards shows every other month making a good job of selling movies and movie stars for ratings, fame and fortune like formulas and books about crafting.  It’s all so impossible and predictable and even random but it’s like being part of something, however distant; it’s like the magic of movies you hear about but doubt, the glow from the inside out when something gets inside, the pictures and writing and the blogs catching your eye, one more way of sharing, knowing and owning it, living it one at a time and then all at once until you get to do it again. 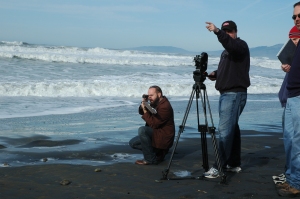 I’ve invested hundreds of thousands of words now, this my 2nd year going on forever, hundreds of reviews and editorials fueled by opinions, frustrations, dreams and aspirations.  So much has changed while staying exactly the same as when I thought about doing this, imagined the incredible effort to keep it going set alongside the incredible experiences thus far.  I keep on this road, this chance that it matters – the Filmmaker and Film Critic makes Movie Blogger Efforts, as much for myself as for you, inviting you in, asking you to share in the collective impossibility of it all.  The question is not where I’m going or even where I’ve been, it’s not about why or what for but how this now finds you in passing, holding on to jagged pieces of maybe to fend off certain failure and learning to love the life existing between the lines.

Rory Dean is a multi-medium artist, writer and new media strategist with a background as a creative consultant and technology liaison in the San Francisco Bay Area. His broad experiences and specialties include print-to-web publicity, promotions and design marketing using traditional and social media networks. As a motion pictures and television professional, his short films, productions and commercials have screened to domestic and international audiences. His connections to a diverse client base include artists, entertainers, corporations, non-profits and everyday people.. Dean is co-owner and founder of Dissave Pictures, a boutique production company focusing on audio, video, photography and multi-media designs. Dean's personal and professional background includes dreaming and avid notebook journaling, creative and copy writing, promotions and marketing, audio/video production, photography, videography, editing, web design and new media. He’s also a fan of collaboration and knows when to turn the reigns over, offer feedback, lead the team and step aside. His portfolio includes print, online, film, video, photography, graphic design and promotions. He’ll show you. He has a book and everything. "When not juggling various online worlds, I do a pretty good mime – but that’s another story."
View all posts by rorydean →
This entry was posted in Essays on art, Essays on Film, Movie I've Seen, Movie Makers & Shakers, Movies You Should or Should Not See, On DVD, Online, philosophy and film, Rants & Raves, Speak-Freely, Uncategorized and tagged above the line, Academy of Art University, Arts, Dukes of Hazzard, east bay, Film, film critic, film criticism, filmmaker, Filmmaking, jean-luc godard, la maniere, movie, movie blogger, northern california, once beautiful past, practical movie reviews, rory dean, San Francisco. Bookmark the permalink.