Edward Thomas Hardy may have made some of his most accomplished films well under the radar and off the beaten path before now, but his steady rise from BBC everyman to Hollywood Courtier is nothing if not a meteor of classic talent fueled by celebrity star power.  His quick wit and lasting charm is second only to his animal magnetism, his self-professed desires to get at what makes us afraid undeniably inviting, to channel our deepest, darkest fears and surprise us once we get there together.  He cut his acting teeth on a string of articulate, stand out character roles in films that earned him attention and accolades, strung together like a stepping stone path straight to notoriety in the press and producer’s attention everywhere else.  He was a serious actor way before the spot lot found him, sought after for his ability to inhabit the roles of varied souls and own them, make them far more than the sum of their parts.  Most have little to no chronological appreciation of his career, the years in service of the crown and country, stage plays and films, television series and others.  He’s played type and one-offs, done the gritty street tread builders and others, most notably Inception and The Dark Knight Rises for the big box office world market crowd, Tinker Tailor Soldier Spy for the award show calculators and a chance to work with his idol (Gary Oldman), low-budget brawler films like Bronson and RocknRolla, and slick kick ass floppers like Sucker Punch.  But Hardy’s inevitable glory is surely upon us now, in the here of a decade plus of films, making a solid run for the big, big bright lights and we can’t seem to get enough of his rising star.

If Hardy’s career has indeed risen and his name is in check for household bankable, it will be John Hillcoat’s (The Road, The Proposition) prohibition era slice of Americana flick Lawless that will solidify what some of us already know – that he brings a depth and warmness to his portrayals, a sense of something going on before and after the last curtain call.  Perhaps in this case the frothy breath of popular hot topic conversations have it right, the bubbling that’s stirring, in part for what he’s done before now if not for what’s up just ahead – Hardy’s first title role in the aging Mad Max franchise will perhaps be his great shining moment or signal a leveling out.  It’s hard to know if he’ll maintain the staying power of any one of his idols, de Niro or Sean Penn, even Gary Oldman continues to shape change and surprise, moving steadily from one generation to another with all the ease of the very best in Hollywood and elsewhere.  Careers are built on success and failures though, every big-biggest poised ever so near box office disaster because there is no formula for success, at least none that we know today. 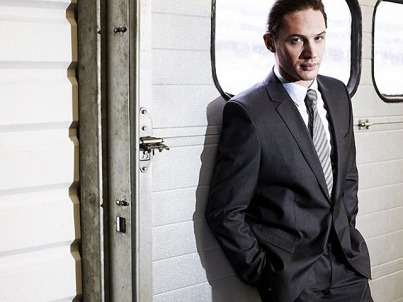 Hardy has earned quite a reputation for bare fisted brawlers and wounded souls, but early on it was the BBC mini-series The Virgin Queen and ITV’s WutheringHeights that got him going, the latter of which earned him a BAFTA Rising Star Award for Best Actor.  Hardy is a naturalist at heart, easy to believe in, ready to fill any and every role with the kind of genuineness many American actors spend a career time fashioning from the crash and burn of box office successes and tabloid fire storms, ultimately reborn in serialized network and cable television like Gary Sinese, Jim Caviezel, Ice-T, Ice Cube and L.L Cool J.  Hardy surprises the way he carries himself like a card carrying member of Brando’s method school of verisimilitude, perhaps most notably his transformational aptitude to gain (42 pounds to become the prison braggadocios Bronson) and shed weight too, change his face and body type, moving from James Bond license to impress to vicious vaudeville institutional with such ease as to fool audiences into believing it’s no big deal.  He did what Mark Wahlberg did in the beginning, following his good looks wherever they may go; in Hardy’s case he won The Big Breakfast’s Fine Me A Supermodel competition and at age 21 garnered a contract with Models One.  He was slated for formal training at Drama Centre London that same year but detoured into the HBO-BBC miniseries Band of Brothers, both a wise career move in terms of the popularity of Band, and one that put him on Ridley Scott’s radar and consequently making his feature film debut in Black Hawk Down.  A string of notable performances in films and projects would follow, including awards and world exposure in North Africa before a series of projects laden with awards and accolades.  From there it was stage and screen, one after the other and often at the same time, a brutal schedule that seemed only to further his prominence and inevitable fame, perhaps no better exemplified than his ability to stand toe to toe with considerably more seasoned actors and take their steam.  If Christopher Nolan’s epic run-on sentence box office megalith put Hardy in mainstream running for whatever project he wanted, it was his announcement to play his first title role in a new version of Mad Max that would have critics and audiences fawning over his every next move.

Tom Hardy has a bright career ahead of him, a strong outlook on what he wants to do and how he approaches the art and craft of acting that shows open skies ahead and a growing fan base around the world.  He’s quoted everywhere as actor that likes to dig into a role and get the stuff down deep where every character lives, breathes and dies in the hearts and minds of an audience.  “Have you ever been in the same room with a dangerous animal?” Hardy is quoted as saying when prompted about his career of masks and layers.  Another source goes on to include, ”This what I’m aiming for. That’s what I need. I want to be a beast, like my acting idols.”

”Gary Oldman, Robert de Niro and Sean Penn,” he lists as his heroes and that seems about right company.

Rory Dean is a multi-medium artist, writer and new media strategist with a background as a creative consultant and technology liaison in the San Francisco Bay Area. His broad experiences and specialties include print-to-web publicity, promotions and design marketing using traditional and social media networks. As a motion pictures and television professional, his short films, productions and commercials have screened to domestic and international audiences. His connections to a diverse client base include artists, entertainers, corporations, non-profits and everyday people.. Dean is co-owner and founder of Dissave Pictures, a boutique production company focusing on audio, video, photography and multi-media designs. Dean's personal and professional background includes dreaming and avid notebook journaling, creative and copy writing, promotions and marketing, audio/video production, photography, videography, editing, web design and new media. He’s also a fan of collaboration and knows when to turn the reigns over, offer feedback, lead the team and step aside. His portfolio includes print, online, film, video, photography, graphic design and promotions. He’ll show you. He has a book and everything. "When not juggling various online worlds, I do a pretty good mime – but that’s another story."
View all posts by rorydean →
This entry was posted in Movie Makers & Shakers, Online, Speak-Freely and tagged above the line, acting, actor, bronson, Drama Centre London, edward thomas, Hammersmith, inception, London, method acting, practical movie reviews, rory dean, The Big Breakfast's Find Me a Supermodel, Tom Hardy. Bookmark the permalink.